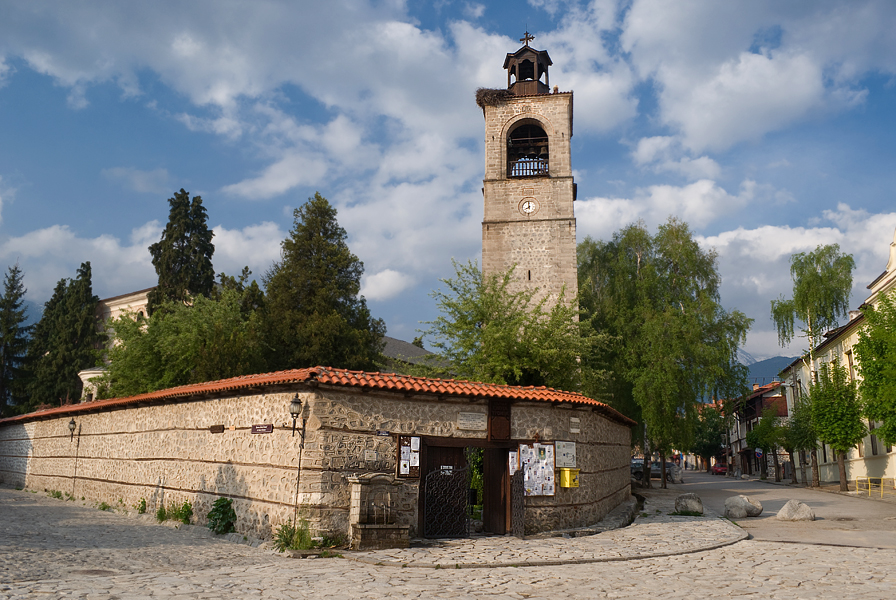 The temple complex consists of a church, a bell tower and fence walls; it was declared a monument of architecture.

The temple is a nave basilica, built in 1835 by local builders by the initiative of the trader Lazar German from Bansko.

A Christian cross and a Turkish crescent can be seen by its main entrance, close to each other – a symbol of tolerance between religions.

The name of Lazar Glushkov stands among those of the master masons, who built the temple in the period between 1833 and 1835. The paintings on its walls were made by some of the most prominent artists of the Bansko and Debar Art Schools – Master Velyan Ognev, who made the unique carved iconostasis, the original murals on the columns, the walls and the dome; Dimitar Molerov, who made the crucifixion cross, the throne, the large iconostasis icons, and Simeon Molerov, who also created wonderful iconostasis icons.

The bell tower in the courtyard of the temple was built later – in 1850 by Usta (master builder) Gligor Doyuv. It is 30 meters high and is considered a symbol of Bansko. A clock was installed at the bell tower in 1866 by the self-taught builder of Bansko – Todor Hadzhiradonov.

The whole complex is designated as one of the most brilliant achievements of the Bansko culture in the era of the Bulgarian Revival.

Icons and candles are sold at the temple.