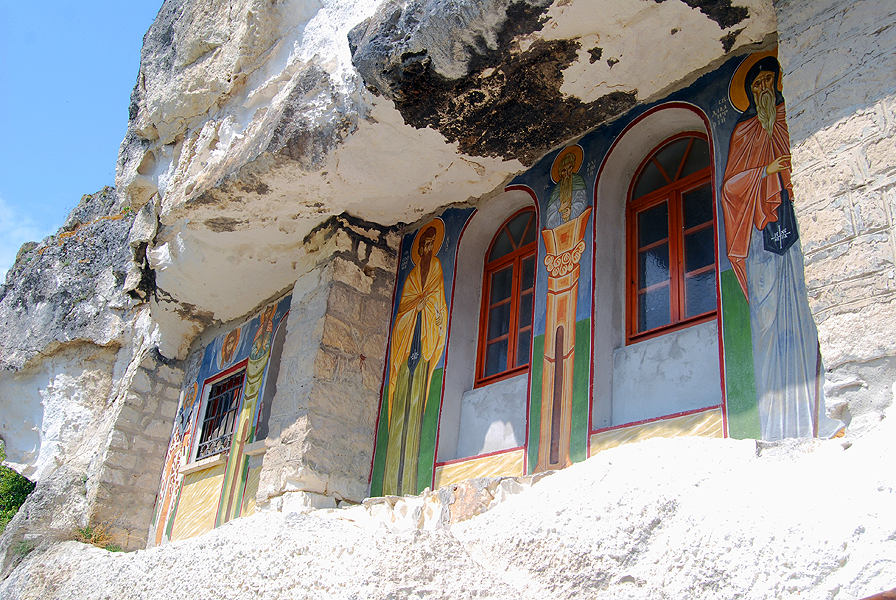 The Basarbovski Rock Monastery “St. Dimitrius Basarbovski” is situated in the valley of Rusenski Lom river, near the village of Basarbovo, 10 km from the town of Ruse.

The rock monastery was established during the existence of the Second Bulgarian Kingdom, but for the first time its name was mentioned in the Ottoman Tax Register of 1431. For some time during the 19th century the monastery was left uninhabited, but in 1937 the priest Hrisant of the Preobrazhenie Monastery settled here, and he set a new beginning of the existence of the religious settlement.

The most famous inhabitant of the monastery was St. Dimitrius Besarbovski who was born in 1685 in the village of Besarbovo, and spent his entire life in the holy monastery. After his death the monk was buried in the village church, but during the war between Russia and Turkey in 1768-1774 his relics were moved to Bucharest in the church St. Konstantin and St. Elena where they have been kept to the present day.

The Basarbovski Monastery is the only active rock monastery in Bulgaria.

The pathway, along which one can go to the monastery, passes through a beautiful yard full of greenery and ends by a well, dug by St. Dimitrius. The local people believe that the water in the well is curative.

Two rooms and the cave dining room, built in 1956 are situated in the foot of the rocks. From this point, 48 stairs lead to a rock platform where the niche where St. Dimitrius slept is situated, according to the legend. To the right of it there is a rock church with a wood-carved iconostasis made in 1941, and next to it is the large icon of the saint, pictured in his full-length.

Along a stone staircase one can reach the natural cave, in which the monk Hrisant was buried. He was the person who restored the monastery and took it back to life in 1937. The cave performs the role of an ossuary, in which the museum exposition is arranged.

The temple is honored on 26 October – the day of St. Dimitar.

No accommodation is offered in the complex. Information materials and icons are sold in the monastery.