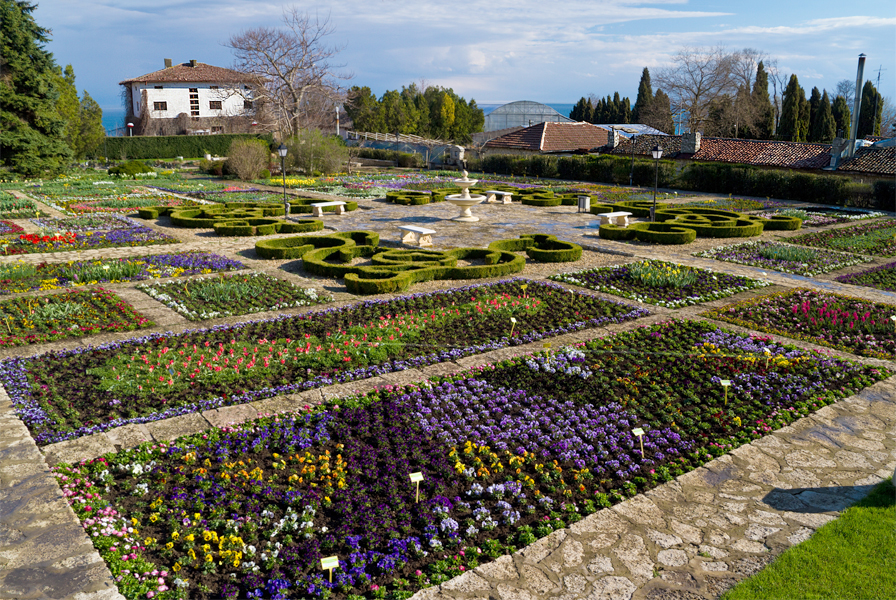 The Palace is the former summer residence of the Romanian Queen Maria Alexandrina Victoria de Edinburg (1875 – 1938). It is situated approximately 2 km south-west of Balchik in a beautiful locality between the Balchik rocks and the sea. The Palace is a designated archeological and constructional monument of culture and a monument of the gardening and landscape art, declared by Statute No 09-128 of the Ministry of Culture dated 18 April 2002. Just next to the terraces is formed beautiful waterfall, high 25meters. Another smaller waterfall lours from “Allah’s garden” through thick wall to three-flow fountaininto deep stone pool.

During the Second Balkan War (1913) the Romanian army occupied a part of Dobrudzha and the town of Balchik fell within the borders of Romania. Romanian intellectuals had appraised the beautiful landscape in the region and during the 1920s many prominent Romanian aristocrats and people of art purchased properties here. Queen Maria was brought by her friends to Balchik, and she was fascinated by the landscape and the spirit of the town. She decided to build her own summer residence here, and had a strict requirement for the designers so that the construction of the villa does not harm the natural environment, but rather complements its beauty.

The residence was constructed by the Italian architects Amerigo and Augustino in 1924. It is formed with beautiful threshold terraces along the steep sea shore, through which the water from two springs flows along special stone channels and pours into water mirrors and waterfalls.

The style of the new buildings is in unison with that of the found one, and the old mills were restored. The contrast of the white rocks and the red roofs which is typical for the town was preserved.

The park along the sea shore was developed by the Swiss gardener Jules Gianni. The strip is 60-70 meters wide and more than 400 meters long. Christian and Muslim symbols intertwine in wells and gardens, and the flowers and the decorative pots for the gardens were bought from various parts of the world.

The complex is composed of a few villas and buildings with characteristic emanation. The Blue Arrow villa was built in 1931 on the edge of a cliff, above the sea shore.  The following people had lived in the house during various times – Prince Nikolay – the second son of Queen Maria, and Princess Ileana – her youngest daughter. Now a gallery and a wine degustation room are situated.

A statue of St. Martin – a patron of the Roman royal family, can be found next to the administrative building in the complex, on top of a stone column.

A beautiful waterfall with 25 meters of height from the fall is found in close proximity to the terraces. Another smaller waterfall comes from the “Garden of Allah” through a thick wall along a three-flow fountain in a deep stone basin.

The Chapel named “The Assumption of Mary” was built in 1932 and is situated in another beautiful white-blossom garden. The wood-carved throne and the iconostasis, however, were manufactured as early as 1721 and were purchased especially for the chapel from Cyprus.

From the chapel one can reach a garden full of lilies, called “The garden with the cross-shaped water mirror”, carved like a cross in a stone terrace and encircled by heavy ship chains. From there along white stone stairs one can reach the Gethsemane Garden, surrounded by black tulips blooming in the Spring. Rare tree and bush species grow in the Gethsemane Garden – jujube, paradise apple, pomegranate, fig-trees, Dutch tulips in various nuances, begonia, iris, etc.

A small building is situated in the northern part of the garden. It has existed as early as before the palace was built. Powerful stream of water gushes out from its wall, and is believed to be medicinal. A small chapel was built there – a holy spring.

From the Gethsemane Garden through gates of wrought iron one can enter the Mavi Dalga garden (The blue wave). It was built along the lowest coastal terrace between 1930 and 1933. Stone pathways cross-rule the garden to separate nooks. Magnolia grows here, as well as a very rare and precious species for the park – cotoneaster.

The garden with the water lilies is called “The English Yard” and is preserved by the freezing costal wind by massive walls.

From the English Yard, through boxwood hedge, two stairs lead to a vaulted stone bridge, reminiscent of The Bridge of Sights in Venice.

The renovated mills are nowadays used for hotel basis of the complex.

Queen Maria died on 18 July 1938 in Sinaia – Romania, and her heart, by her will, was placed in a small golden casket and returned to the chapel “The Assumption of Mary” in The Palace, from where in 1940 it was returned to Romania.

Advertising and informational materials in Bulgarian, Romanian, English language and mixed copies are sold in the complex.