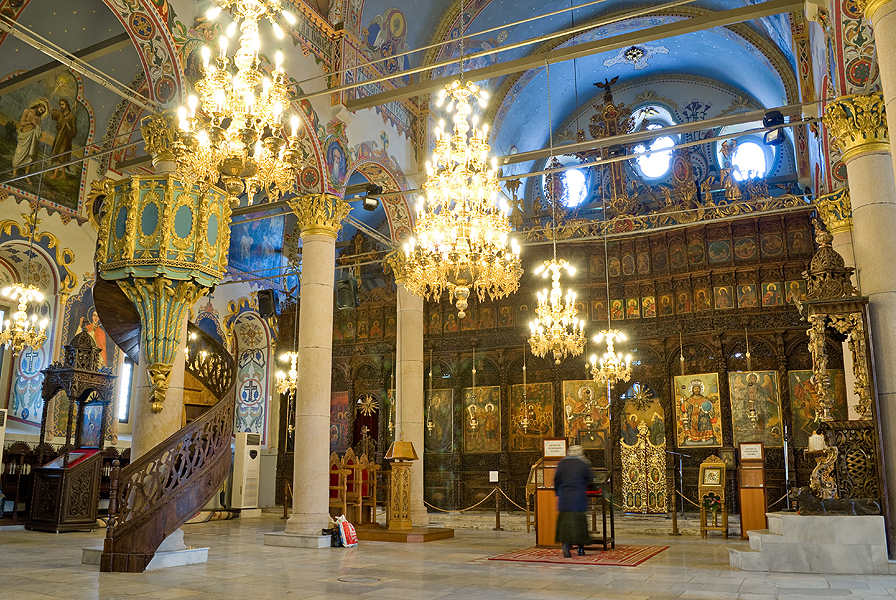 The church “St. Mary” is the oldest Christian temple in Pazardzhik and one of the symbols of the town. It was declared an architectural, constructional and art monument of culture with national significance in Issue 98 of the State Gazette of 1964. During the years, the temple was constructed five times by the local people, as during all the periods of construction the church was built into the ground by order of the Ottoman Authorities.

The first historical evidences for the church date back to the 17th century. In the 18th century the temple became a center of the education activity, where various liturgical books were copied.

In its present look the temple was constructed in 1836 -1837, and in contrast to the previous wooden constructions, the new church was built by stone and bricks.

According to a legend, the Ottoman authorities did not allow construction of a large church, but the main builder convinced the town rulers to construct a church not only larger than the size of a buffalo skin. The builder proved his statement by cutting into thin lines one buffalo skin and then he outlined the place with them, and this way he determined the sizes of the new church. The Turkish ruler kept his promise and the church was constructed according to the starting size. The temple, however, had to be sunken into the ground and surrounded by high walls, in order not to be seen.

The church belfry was also constructed after the Liberation (1878). The fence which surrounds the church was demolished in 1904, and in 1914 the St. Mary church was renovated on the outside and on the inside.

“St. Mary” occupies an area of 1140 square meters; on the outside its height reaches 14.5 meters, and on the inside – 16 m. The chapels are built inside of the church, in its west part, after the anteroom – St. Archangel on the left and St. Nikolas on the right. Above them is the balcony which serves as a convent (female church).

The church is famous among pilgrims and tourists mostly for its iconostasis. The wood-carved iconostasis is made of walnut-tree by masters of the Debar School. Its size is 20.40/6 meters and area of 120 square meters. The typical for the Debar School preference to human and animal figures can also be noticed in the iconostasis of the temple. The wood-carvers had made a special accent on the human figures – they can be noticed on two lines of panels in the basis of the iconostasis, and scenes of the Old and the New Testament are presented. Gryphons, dragons, wolves and others are among the presented animal figure. Christ, angels, cherubims, etc. are also depicted on the iconostasis.

In the church “St. Mary” there are 221 icons dating back to various periods – 18th, 19th and 20th century. The church celebration is celebrated on 15 August – The Assumption of St. Mary. The church is included in the list of the 100 National Tourist Sites. Icons, information materials and books about the history of the church can be bought from the church.