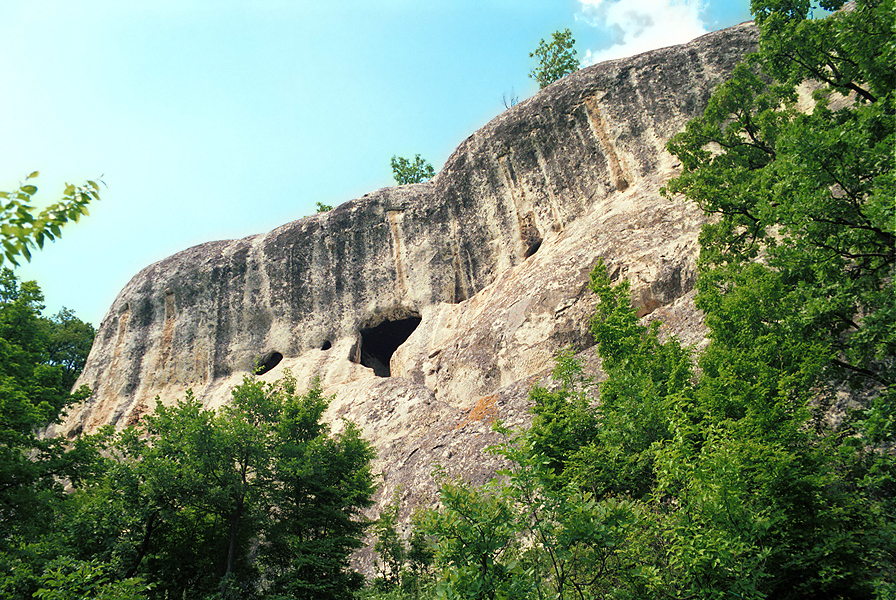 Shumen Plateau Nature Park is located in the eastern part of the Danubian Plain, near the town of Shumen. It lies on the territory of Shumen Plateau and takes up an area of 3 929.9 hectares. It was declared a nature park in 1980 with the aim of preserving its valuable flora and fauna species, its tableland landscape and its tourist spots and places for rest.

The highest point of the park is 502 m above mean sea level. The climate is temperate continental.

The specific natural conditions of Shumen Plateau Park allow for the growing of thick vegetation. 90% of the territory of the park is covered with forests. Most widespread are the mixed deciduous forests where one can find European hornbeam (Carpinus betulus), beech (Fagus), Turkey oak (Quercus cerris), maple (Acer campestre), ash (Fraxinus), lime(Tilia), etc. The coniferous tree species are represented by European black pine (Pinus nigra), Scots pine (Pinus sylvestris), Oregon pine (Pseudotsuga menziesii Franco), Norway spruce (Picea abies) and spruce (Picea). The most common shrubs there are the dog rose (Rosa canina), the hawthorn (Crataegus), the European cornel (Cornus mas), and the hazel (Corylus). Different types of bush and grass grow on the open areas of the park. There are 14 kinds of orchid(Orchidaceae) and over 250 kinds of medicinal plants. 64 plant species are protected by law.

The Shumen Plateau has been inhabited by people ever since ancient times. Evidence in support of that comes from the fragments of clay vessels and tools discovered in the caves. Various Thracian, ancient and medieval settlements and fortresses existed in this place over the different historical periods.

The cave monasteries – religious and cultural centres, were set up during the Second Bulgarian Kingdom (12th – 14thcenturies). They are situated in inaccessible rock rims on the eastern and the southern slopes of the plateau.

Shumen Fortress (the Old Town) is the most significant historical and archaeological site on the territory of the nature park. It is a sophisticated complex of residential, religious, and fortification buildings.

The Founders of the Bulgarian State Monument is also located within the park. It was built in honour of the 1300thanniversary since the foundation of Bulgaria. It depicts the most important moments from the history of the First Bulgarian Kingdom (7th century – 11th century).

The park is a nice place for recreation, sport and tourism throughout all seasons. Access to the park is facilitated by its close proximity to the town of Shumen and the well-maintained road and alley network. It provides excellent conditions for hiking and cycling. The tourist routes are marked and well-kept and take the visitors of the park to attractive rock formations, venerable beech forests, historical landmarks and rest-houses. There are good conditions for extreme sports, such as rock climbing, caving, and paragliding at the park. Tourist cabins, alcoves, fountains and rest spots are built for the convenience of tourists.

An information centre operates on the territory of the park. It provides information about the tourist routes, places of interest, protected areas, etc. Information materials and souvenirs are sold there. In addition to that tourists can also hire guides or rent bicycles at the information centre.

The Forest School is not far away from the information centre. It is an interactive complex where ecological activities and projects are carried out in a natural environment. It comprises a Forest Maze, a Path of Tales and a Plein-Air Classroom. The park administration offers guide-entertainers to groups at the Forest School.